Power Pack is a one of only three toys from Centurions' second series that were actually released (the others were Sea Bat and Swingshot). It contains a geared, motorized mechanism that can be attached to an Assault Weapon System, then activated by pulling a string attached to a "radar dish" and flipping the on/off switch; it then automatically triggers most of the Assault Weapon Systems' action features, causing missiles to launch while other accessories rotate or pulsate. The Power Pack can be used with or without a Centurions hero figure.

The Power Pack includes a radar dish and missile, plus an adapter that allows it to be used without a Centurions hero figure. The 1987 Kenner catalog says that "The Power Pack also comes with a sonar dish and triad missile, so by itself, it becomes an automated Doom Drones tracking unit!"

The 1987 Kenner catalog states that not only would the Power Pack be sold by itself, but it would also be included free with Sea Bat, Awesome Auger and Strato Strike. Of these three items, only Sea Bat was produced, and it did not include a Power Pack.

The catalog also states that the Power Pack would work with any Assault Weapon System, but this is inaccurate. it doesn't activate Hornet's helicopter backpack, Skybolt's turbine engine backpack, or either half of Depth Charger. However, it's been rumored that the mechanisms of these toys would have been redesigned to become compatible with the Power Pack if the line had continued.

The original package design for the Power Pack included a large yellow starburst which did not appear on the final version.

Text from the Backing Card 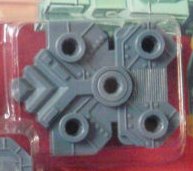 Chest piece
Add a photo to this gallery 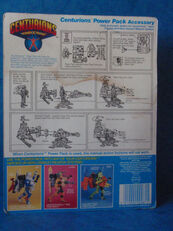 The back of the Power Pack packaging. 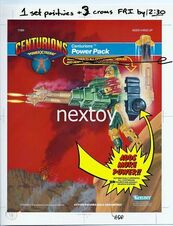 A cromalin of the original package design, featuring the yellow starburst. 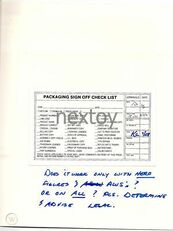 Kenner employee notes on the package text, emphasizing that the blurb should specify that the Power Pack works only with Centurions hero figures.
Add a photo to this gallery
Retrieved from "https://centurions.fandom.com/wiki/Power_Pack?oldid=4793"
Community content is available under CC-BY-SA unless otherwise noted.