Man or Machine (Part I)
Broadcast

John Thunder is a member of The Centurions, and serves as the team's Native American Covert Operations Specialist. Espionage and infiltration expert. In addition to his two weapons systems, John Thunder utilizes non-cybernetic weapons:

I hear those things are awfully loud It glides as softly as a cloud Is there a chance the track could bend? Not on your life, my Hindu friend

What about us brain-dead slobs? You'll be given cushy jobs Were you sent here by the Devil? No, good sir, I'm on the level

The ring came off my pudding can Take my pen knife, my good man I swear it's Springfield's only choice Throw up your hands and raise your voice

But Main Street's still all cracked and broken Sorry, Mom, the mob has spoken 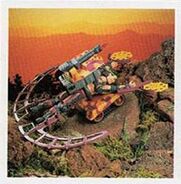 Thunder Knife
Add a photo to this gallery
Retrieved from "https://centurions.fandom.com/wiki/John_Thunder?oldid=4691"
Community content is available under CC-BY-SA unless otherwise noted.